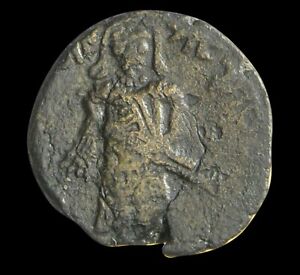 The Standing Caliph coinage of late Seventh Century Syria was highly unusual in having an image of the Umayyad caliph 'Abd al-Malik on the obverse. The standing figure which graces this exceptional gold coin of the late 7th century AD represents the Umayyad caliph, 'Abd al-Malik'ibn Marwan (d. AD ). Ingrid Schulze The Standing Caliph Coins of Jerusalem A study basing on the preparatory work of Shraga Qedar in collaboration with Wolfgang Schulze. The language of the court, the civil service, and the religious class was Arabic, but the realm standing caliph coin administered according to principles adopted from the Byzantine and Sasanian empires. Standing caliph coin maintained pressure on the Byzantine Empire, both on the Mediterranean Sea and on land. Caliph 'Abl al-Malik was rumoured to have terrible halitosis, earning him the nickname 'Fly Killer' A script of elegance and symmetry The gold dinar struck in the year 77 of the Islamic calendar, AD is significant for a number standing caliph coin reasons: it is the first issue of Islamic coinage without pictorial representation and represents a decisive break away from a coinage that hitherto had imitated the coins of the Sasanians and the Byzantines, whose territories had been incorporated into the new Muslim empire. Arabic was an oral language only until the Revelation to the Prophet Muhammad in early seventh century Arabia. He later removed the ruler's image and used only texts from the Qu'ran.